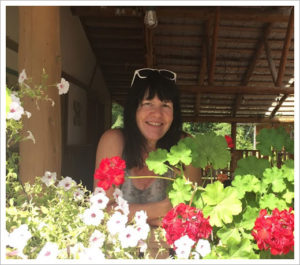 Gisela was born and raised in the German part of Switzerland, in a small town called Weinfelden and after graduating she moved on to the „Handelsschule“ in Frauenfeld where she got degrees in business and languages. While working as a texter at a publishing house she went to evening school to become a marketing and advertising assistant and worked the following 5 years in Zurich for the Visa credit card department at the „Bankverein“. Coming from a long line of hoteliers and restaurateurs on her father’s side she decided to take a turn of careers and trained at a hotel while working as a bartender and waitress at a night club in her home town. 2 years in Aspen, Colorado, followed, where she collected more experience at a Swiss catering business, a Swiss bakery and also a Swiss restaurant. Back in Switzerland she realized that she needed mountains around her and moved to Zermatt in the Swiss alps. She managed a hotel and restaurant at the bottom of the Matterhorn and hosted year-round downhill world cup skiers from all over the world (lots of whom she already had met in Aspen and would meet again in Canada) while she was applying for Canadian citizenship.

In 1996 she finally immigrated with her Swiss mountain dog “Chevy” to Ontario and started a summer long road trip through the country to finally settle in Meadow Creek. Together with her parents and one of her brother‘s she bought a fallow deer farm and for one year she actively helped building her parents and her own house while she got to know the area. During the following 4 years she dedicated her time to learn the Canadian way of doing business in the hospitality sector with the goal to finally own and operate her own business. She worked as a motel & restaurant manager, as a specialty tour guide for Volkswagen winter driving training and in various ski areas like Banff, Panorama and Whistler, before she decided in May 2002 that she was ready to apply her broad knowledge and bought the originally called “Last Chance” in Kootenay Bay (the name referring to the close proximity to the ferry) and changed the name to “Boccalino restaurant, motel & cabins.

She felt home immediately with all her favorite elements around her and an abundance of outdoor activities at her feet. Looking back, it has been a long journey and lots of hard work building, renovating and establishing Boccalino. It is an ongoing process where Gisela keeps doing what she loves, organizing a new season, running the office, creating an experience for guests on her restaurant patio, sampling the food and wine for the menu, planting and harvesting from the own garden and on and on and not to forget sail and ski and enjoy traveling and the beautiful Kootenays whenever there is time to do so. 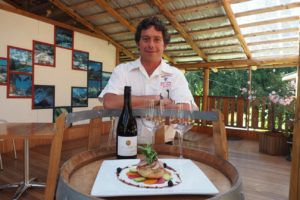 Yves was born in Moutier, in the French part of Switzerland and was raised tri-lingual (French, German and Swiss) thanks of spending lots of his holidays at his Grandma’s restaurant in Niederurnen. He had a natural talent and quickly became a valued help in and around the kitchen being mentored mostly by his Grandma but also by several of his relatives which also were in the hospitality business. After finishing school he decided to become a chef and started a 3 year apprenticeship at „Kartause Ittingen“, a self-sufficient monastery with its own vineyard, brewery, fishery, butcher shop, bakery and agricultural farm in the canton of Thurgau. There it was where he learned all the basic techniques of cooking, baking, butchering, growing and harvesting, and after graduating he immediately got hired at a two star Michelin rated restaurant where he had two apprentices under his supervision.

After 6 years of cooking Yves decided to explore a view different directions. He worked for several years as a ski patrol, trained in blasting & avalanche control. He spent a view years in the Swiss alps as a Sheppard and cheese maker. He also learned the craft of Swiss watch making and boat building for a couple years and owned and restored his own sailboat. In 2009 he traveled to Thailand, where he learned the basics of the native language along with Thai cuisine, and after returning to Switzerland in 2010 he decided to finally go back to cooking in a restaurant where he could combine his international experiences with his passion for food. And here we are now, looking back at the last 8 years.

Yves has become the heart and soul of the Boccalino kitchen, even managing it when away to work on his Citizenship and become a Canadian trained Red Seal. Kootenay Bay has become his home where he has found the place to combine his main passions for food, skiing, kiting and sailing. In 2020 he finally got his Swiss-Canadian citizenship and became the owner and host of The Masked Lemon online cooking school. 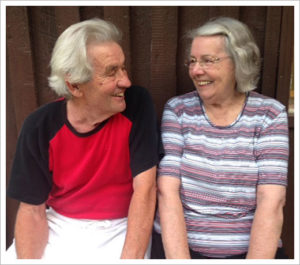 Heidi and Dieter immigrated from Switzerland to Canada in 1996 and settled in Meadow Creek BC with their two youngest kids of five. Although they officially had retired and passed on their self established home hardware business plus sports equipment store to their two sons in Switzerland, they found themselves busier than ever, building a house and life in Canada and helping out Gisela with her business.

Dieter as a Swiss trained baker and pastry chef with life long experience who also trained 26 pizza cooks for Boccalino over the years and Heidi as knowledgeable gardener, herbalist, business woman, super mom and passionate cook who spent lots of summers in the hot and busy Boccalino kitchen. Both of them have a thousand talents, make schnapps (for medicinal use only!), are handy, energetic and fun to have around which everybody knows that has been at Boccalino on weekends. Not to forget Dieter’s homemade ice cream and so unique European desserts and Heidi’s enthusiasm and humor and her sporadic yodeling moments…

There just wouldn’t be Boccalino as it is today without Heidi and Dieter – the parents! Their passion, their love and their ongoing support is highly appreciated by everybody and especially by Gisela! 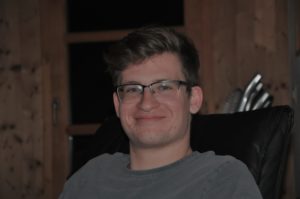 My name is Marc Weilenmann and I’m from St.Gallen, Switzerland. I’m 19 years old and I have finished my apprenticeship as cook in a 14 points Gault Millau rated restaurant last year. After that, I worked in the same Restaurant until my military training school started. In the Military training school I also work as a cook and have to cook meals for up to 200 people. Im going to Canada to learn more about various cuisines and expand my knowledge and of course to learn English. 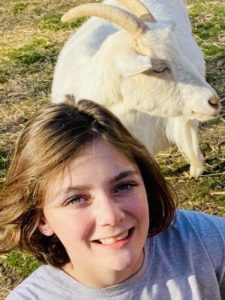 I will be 15 years old this May 24th. The Kootenays have been my home ever since. The small farm I grew up on, required me to do all sorts of chores, including caring for my herd of goats. Whenever my mom needed help with cleaning our rental units, I did my best to do a good job and learn the basic skills required. Other than that, I enjoy living on the lake, swimming, canoeing, and spending time with my siblings and cousins.
Working at the Boccalino allows me to stay close to my family, while being able to gain valuable work experiences in the service industry. 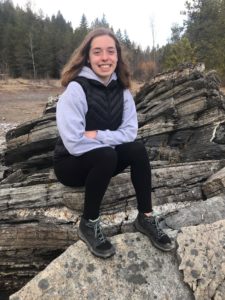 “Kootenay has so much heart and soul. I’ve been coming here for as long as I can remember as a child, and I have so many great family memories here! Some of the best things to do around here are; swimming and photography! I’m so grateful to be working with a local team and look forward to a rewarding work experience this summer!”